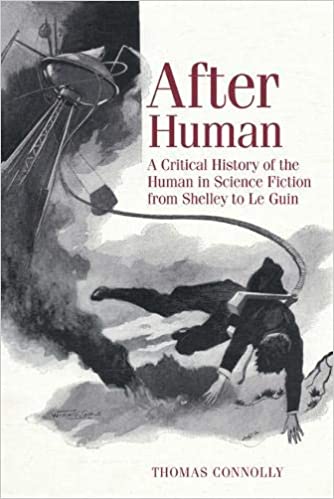 What is meant, or supposed to be meant, by human, non-human, and whatever division between them which withstands the test of various philosophical and science-fiction thought experiments, falls central to the scope of this book. As Thomas Connolly states in the introduction to his dense and stimulating study, his aim is “to examine the ‘human’ as he has become a subject of intense thematic concern in 19th century Anglo-American SF works. century to the 1970s. “He therefore devotes part of his Introduction to basing his line of research on cultural theory, explaining why he regards SF as a posthumanist mode of literature -“ all SF is posthuman ”, he says,“ or, more precisely , all SF is engaged with. clearly posthumanist concerns “- and by providing the details of the posthumanist model which serves as the basis for his in-depth readings of selected texts. Critical posthumanism, he emphasizes,” seeks both to question and to accelerate the collapse of the monolithic “human” (i.e. white, male, heterosexual, cis-gender and valid) of European philosophical and cultural thought, and to explore new possibilities for reflection on humanity, identity, technology and nature that result from the “end of man.” considered “corrupt” and in need of reassessment; instead the focus is on an “identity bias” which “ can not be resolved neither in unity nor in duality ”. Connolly invokes philosophical works by Martin Heidegger, Jacques Derrida, Jacques Ellul and Lewis Mumford, among others, which comment, question or mediate “the relationship between technology and nature”. Throughout he uses the OncoMouseMT as a powerful embodiment of the collapse of traditional understanding of these two fields, for the tumor-producing mouse is both distinctly natural and simultaneously the indisputable result of “the scientific and technological appropriations of nature that have marked Western civilization ever since. the scientific revolution. ”Using ideas from Paul Kincaid and Tom Shippey, Connolly understands SF as“ something felt, rather than strictly defined ”that is usually concerned with technology, making it“ the ideal genre to examine the figure. of humans and their construction in relation to technological and natural systems.

After these long introductory questions, the book is composed of four central parts: “Worlds lost and won”, “Soma and Skylarks”, “Homo Gestalt” and “Disaster and redemption”. Using Damien Broderick’s notion of “narrative archetypes”, these four sections explore, chronologically, the “pre-human”, the “trans-human”, the “super-human” and the “post-human” respectively. , providing key examples of both classical and postmodern SF that benefit from inspection through a posthumanist lens. The texts thus anatomized are those of Arthur Conan Doyle The lost World and Jack London The iron heel in the first part, that of Aldous Huxley Brave New World and EE “Doc” Smith’s Skylark series in Part 2, Isaac Asimov’s Foundation series and Arthur C. Clarke’s The city and the stars in the third part, and finally that of JG Ballard The crystal world and that of Ursula K. Le Guin The dispossessed. Fortunately, these are not the only titles considered. Other obvious candidates for Connoly’s study, according to Theodore Sturgeon More than human, are also receiving attention, albeit in a more limited way. It’s beyond the scope of this review to cover the details of these central chapters, but I’ll offer some personal highlights. I appreciate Connolly’s historical plot of the “two human lineages” in Part One, illustrating how the philosophical attitudes and beliefs embedded in the work of Mary Shelley Frankenstein and Jules Verne Extraordinary trips enlightened works of later writers. Writing about the Skylark series, Connolly artfully disentangles two distinct streams of “human”: by means of which all “civilized” beings march towards teleological unity under the banner of intellectual and civilizational progress. And one way of reading the phenomenon of crystallization in Ballard’s famous novel, he suggests, is “as a reflection of the alienating qualities of the scientific imagination.”

In the book’s closing section, Connolly distills two fundamental approaches to the non-human in science fiction: one assimilative, essentially absorbing the non-human into human culture, the second transformative, using the non-human to reimagine. and retool our own default. He reflects that “the human” therefore does not include a coherent figure in the history of SF, nor even a certain number of coherent figures, but rather a discursive site on which can be projected a number of hopes and fears ” of several enumerated categories, such as, for example, “the ramifications of technological progress”. He himself recognizes that this can be “something of an escape”; given the SF “mega-text”. Its conclusion, however, is perhaps inevitable and did not seem intellectually anti-climatic to this reader. Getting there is what stimulates. In addition to all of the above, there is a list of works cited which occupies about twenty pages and a robust index.

Connolly’s writing style generally resists the exhibitionist turgor sometimes found in works of this nature, but is still perhaps too loaded with references, quotes, and technical terms for readers allergic to academia. . In addition to scholars and scholarly commentators, After the human should appeal to anyone with a continuing interest in the novels mentioned above.

I note that in discussing the Foundation series, Connolly is limiting himself to the original trilogy, which feels like a missed opportunity, since sequels like Foundation edge and Foundation and Earth explicitly develop unexamined ideas in the trilogy that are highly relevant to Connolly’s goal. As mentioned, the heart of this study is on SF through the 1970s. This is an advantage in that these works have had time to accumulate a rich body of critical writing with which Connolly can engage. , but it also makes her study less adventurous and less risky than it could have been. In the conclusion, Connolly refreshes the proceedings somewhat, with the coverage of figures such as Joanna Russ, William Gibson, Kim Stanley Robinson, Greg Bear, Ted Chiang, and Jeff VanderMeer, but it’s bound to be an abbreviated treatment. I would have liked an entire chapter to be devoted to a freer overview of contemporary works, and I would have liked to see mentions of writers like Charles Stross and Stephen Baxter, who made significant contributions to posthumanist tropes and narratives, in the conclusion. The discussion of Clarke’s work, I think, could have been enriched by referring to Gary Westfahl’s work. Arthur C. Clarke in the Modern Masters of Science Fiction series. Despite what must have been a thorough proofreading, I observe that Everett F. Bleiler is misnamed Everett F. Bailer.

Just as critical theorists have challenged us to design a new framework that incorporates critical postmodern notions into our understanding of identity, Connolly’s analysis also encourages us to re-imagine the gender identity of SF by importing into our readings of notions of posthuman cultural theory. Your level of sympathy for this approach will likely depend on your particular affinity or lack of sensitivity to these ideas. It’s hard to argue, however, that unlike the cyborg in Donna Haraway’s famous manifesto – a hybrid creature who resists synthesis and unity – Connolly’s insightful investigation exemplifies the already fused nature of SF and posthumanism. , showcasing the rewards of an imaginative thought system that recognizes their inherent and fruitful integration.

Alvaro Zinos-Amaro, editor of the roundtable, is co-author of a book of interviews with Robert Silverberg, Worlds traveler, who was a finalist for the Hugo and Locus Award in 2017. Over 30 stories and 100 Alvaro reviews, essays and interviews have appeared in magazines such as Clarkesworld, Asimov’s, Mountain peak, Analog, Speed ​​of light, Nature, Strange horizons, Under ceaseless skies, Edge of the galaxy, Lackington, and anthologies such as The best science fiction and fantasy of the year 2016, Cybermonde, Humanity 2.0, and This path until the end of time.

This review and more in the June 2021 issue of Location.

While you are here please take a moment to support Location with a one-time or recurring donation. We rely on donations from readers to keep the magazine and site running, and would like to keep the site’s paywall free, but WE NEED YOUR FINANCIAL SUPPORT pursue quality coverage of science fiction and fantasy.

© Locus Magazine. Copyrighted material may not be republished without permission from LSFF.