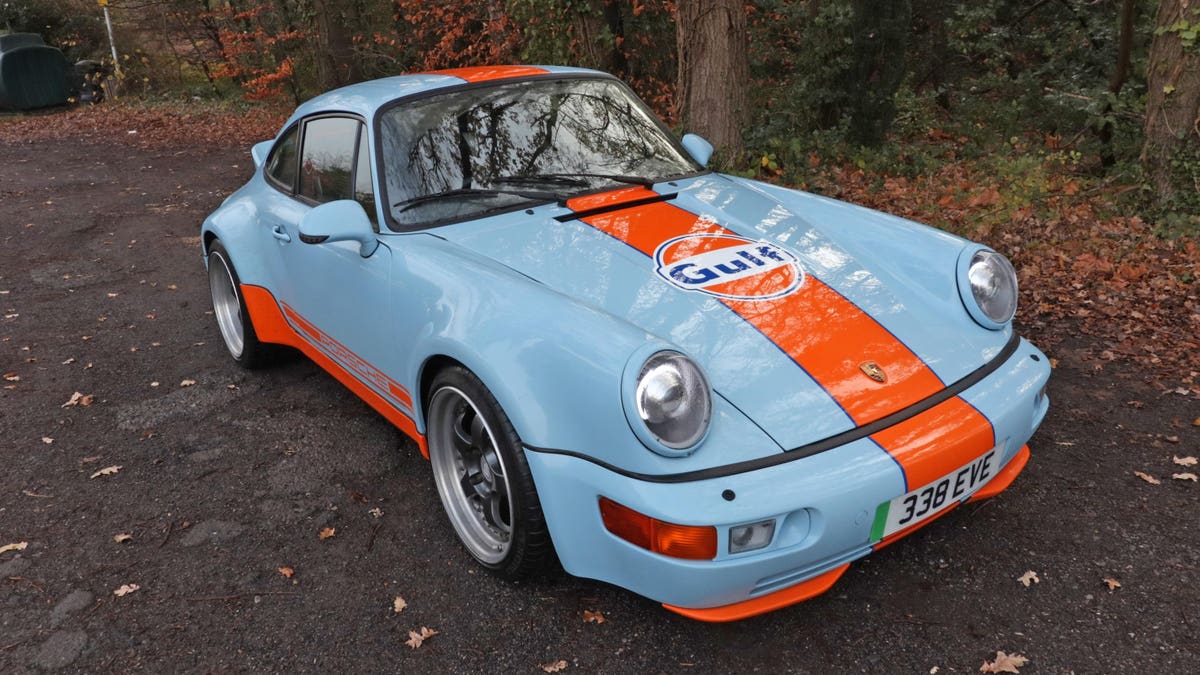 Modern cars have been losing their character for years, and with a few exceptions, electric cars have not resisted this trend. This is why there is growing interest in taking iconic classic cars and converting them to electric driving. Done correctly, much of the original personality can be retained, but without the drawbacks of an older vehicle, such as poor reliability and archaic performance. One of the best examples is the Everrati 911, who I had the chance to spend time with recently.

The Everrati 911 is based on a Porsche of the 964 model era, which ran from 1989 to 1993. The 964 was a leap from the classic 911, which had evolved more gradually since its initial introduction in 1964. But she retained the bulbous front. lights, which were somewhat dimmed with the next generation 993 and beyond. The 964 therefore retains the legendary look of the 911, but with a more contemporary and durable mechanical base than the first 911s.

For its 911 Everrati takes a donor 964, but there have been almost 64,000 built, so finding one that already needs care isn’t such a task. Most of the 964s are now over 30 years old. The Everrati electrification process also involves a complete restoration and the replacement of many panels with carbon fiber alternatives. It’s not all “vintage”, with the car I drove with 993-era door handles, teardrop-shaped mirrors inspired by the Porsches of the same era and a steering wheel. 993 also.

The most obvious replacement is, of course, the engine. This is the aspect that will arouse the purists the most, as the six-cylinder boxer engine used by all 911s (except the 912 variant) is considered the heart of the beast. But there are major benefits to mitigate the loss. The original engine had 247 hp and 310 Nm of torque – decent figures for the late 1980s. But Everrati improved that considerably with its electric replacement.

There are two main variants available – the Pure and the Signature. The former is based on a standard 964 chassis, while the latter uses a wide body. Both versions offer a huge improvement in horsepower. The Pure has 440 hp and 460 Nm of torque, while the Signature has a whopping 500 hp and 500 Nm of torque. In other words, it is more than twice as powerful as the original.

If you miss that flat 6 sound, Everrati can also install an artificial noise creation system with rear tailpipes, which you configure and activate through a smartphone app. This re-introduces a surprisingly realistic simulation of engine noise, with a bubbling idle and a rising note as you accelerate, although of course there is no gear shifting. It can also be very noisy.

The interior has also undergone subtle modernizations. There are heated seats and a media display main unit that includes DAB radio, Bluetooth phone connectivity, and Apple CarPlay support. The latter is essential for satellite navigation in the car and works quite well, but the screen is a bit small. It’s also pretty low compared to where modern cars now place their media displays.

Everrati offers a wide choice of seat upholstery options, from fabric to leather to Alcantara. The seat style can also be specified by the customer, but the default is Porsche Sports Comfort, which has side bolsters that are high like buckets but are otherwise fully padded. They’re a great halfway between racing seats and something you could spend hours in. I had them in a classic Porsche 968 which I have driven for many long trips and found them to be excellent.

The Everrati 911 looks amazing, but that’s because the car it’s based on is one of the most recognizable vehicles ever made. The Gulf Oil livery on the example I drove is in a different league of eye-catching. It’s reminiscent of the 917 racing car from the early 1970s. It’s up there with Martini Racing livery from a similar era for legendary status. The Gulf Oil Everrati turns heads without having to do more than sit there.

However, the way this car drives is really what it is about. If you’ve tried a few older 911s over the years, you’ll know they had a reputation for being unforgiving if you took a corner too fast. Having that engine weight literally behind the rear wheels was great for line pull, but once the rear wheels lost it in a curve due to oversteer on take off, you were made for. Porsche has mitigated this considerably with the Weissach axle fitted to the 993 generation and beyond. But the Everrati 911 predates that.

Of course, however, it doesn’t have a conventional engine behind the rear axle. The electric motor is still on top of the rear axle, but the overall weight is more advanced, and there is a bit more up front with the battery box as well. But this is not another obese electric car. The original 964 weighed 1375 kg and surprisingly Everrati managed to create an electric vehicle that was 30 kg lighter. This is through the liberal use of lightweight materials like carbon fiber.

Due to this similar balance, dynamically this car looks a lot like a 911 from that era. The steering is light and precise, and you feel the road very viscerally through the rack. After getting into the Everrati 911 from a Tesla Model 3 Performance, I didn’t find the acceleration so raw and immediate. But it’s still an incredibly fast car, and a lot faster than the original 964, which took 5.5 seconds to hit 60 mph. In comparison, the Pure takes 4.5 seconds and a Signature like the Gulf Oil car I drove “in less than 4 seconds”.

While the Tesla delivers power as soon as you step on the accelerator even a little, the Everrati 911 is a bit more exponential. You put your strong foot down and it flies away, but smoother pedaling leads to much more refined gear changes. This, again, is more like the original car, except the top end is higher. Once you get used to the level of grip you realize this car won’t kick you off the road if you hit the nasty pedal or take off on a corner the same way a regular 911 might. do it. In fact, the handling is very inspiring.

Part of the reason is that Pure and Signature have a Quaife ATB torque bias differential, to help reduce power without slipping the wheels when you accelerate. However, the Signature has a bit more configurability. The Pure offers sport and eco drive modes, while the Signature adds traction suspension that also configures the power dynamics. This is configured via an additional touchscreen in the center console.

The brakes are also more traditional. Although this car has regeneration so it slows down when you take your foot off the accelerator the brakes are more progressive than many modern cars. Dab them on and they don’t slow you down much. But if you put your foot down they will stop you very quickly indeed. These are proper Brembo brakes with drilled rotors and racing pads. They have the same legendary capabilities so appreciated by Porsche enthusiasts over the years.

One area where Everrati failed to overtake the original 964, however, is reach. All car variants come with a 53 kWh battery, the capacity of which is similar to that of a Current generation Renault Zoe or a whole series of Stellantis vehicles, and less than one VW ID.3 Pro Performance Where Tesla Model 3 Standard Plus Range. With the high engine power, you only get 180 miles of range for the Pure and 150 miles for the Signature Everrati 911. That’s a lot less than the 345 miles the original 964 could cover on a tank, and behind a lot of mainstream electric vehicles now.

In other words, a trip from London to Glasgow will involve many stops. The Everrati 911 is best suited for more local driving or day trips around 100 miles where you know you can charge when you get there. However, the charge is at least fast compared to the competition. There are 11 kW AC and 80 kW DC, the latter allowing an 80% charge in about 40 minutes. So long distances are not out of the question, but not the raison d’être of this car.

Classic electric car conversions never come cheap, but Everrati is in a different league. The Pure costs from £ 200,000 and the Signature from £ 250,000 plus tax and donor car. The Gulf Oil Signature car I drove is priceless. In other words, this is a vehicle for the very wealthy and won’t be a regular EV that you’ll want to drive every day to the store. But as a one-stop statement when you get together with friends for lunch or hit the golf course, it will grab more attention than any modern sports car. And you will have really enjoyed driving there.