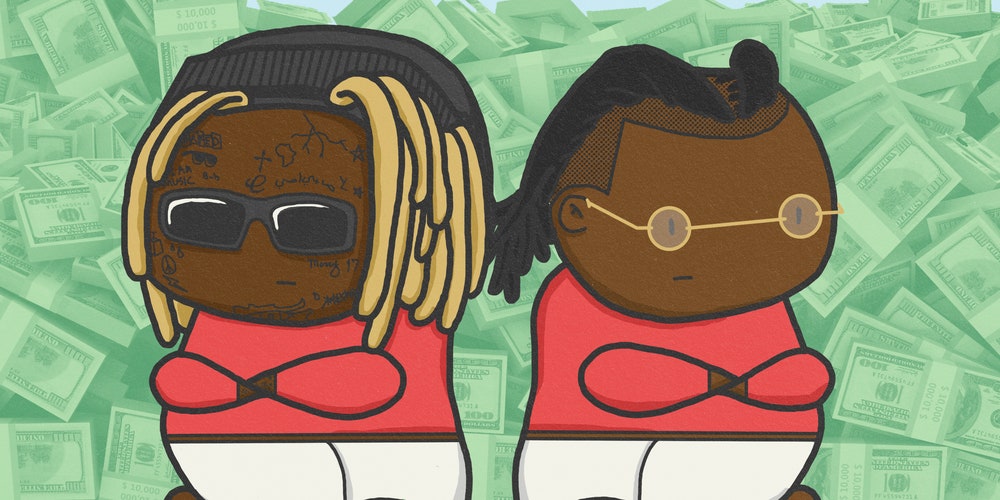 Rich the Kid is always in the right place at the right time. In 2012 he was introduced to Migos at a club and they hit it off. The following year, the Atlanta trio would be the first signers of Quality Control, would have a hit single (“Versace”) – which grew so big that Drake jumped on the remix – and they would drop one of the most definitive southerners rap. 2010s mixtapes (YRN). Through it all, Rich followed, becoming their unofficial fourth member across two collaborative mixtapes, which weren’t that good, but the timing was perfect. Over and over, Rich was close to rappers who were much more interesting than he was at the perfect time: Kodak Black and Playboi Carti just before they became household names; The famous Dex and Jay Critch in the days of the little-known group mixtape Rich forever 3; YoungBoy Never Broke Again when Rich somehow convinced YB to do a joint mixtape. I guess Rich deserves credit for his ability to spot talent, but he managed to survive in rap thanks to his persistence and networking.

His latest venture is Babies Trust Fund, a collaborative mixtape with Lil Wayne; and of course, given Rich’s combination of silly luck and business acumen, it comes in the midst of a so-called Wayne rebirth. Oh, haven’t you heard? Lil Wayne is apparently back and rejuvenated. Proof of this is a slew of features over the past year, albeit despite some streaks of brilliance – its nerd for The Firm on AZ’s. Doe or Die II, or the hunger in his raps on Tyler the Creator’s “Hot Wind Blows” – it’s too inconsistent for me to call it a resurgence.

Much of the space here is filled with hooks and rich worms that could have been easily recycled and no one would know. He continues to have no identity of his own, alternating between this stream of tired triplets and a lazy Young Thug impersonation (most blatant on the chorus of “Feelin ‘Like Tunechi”). If Thug sued me for associating him with this mess, I would understand!

The only reason to care about this mixtape is Wayne, although it often seems like he’s being held captive in a studio by Rich and has to rap to get out. “Buzzin ‘” is a highlight, with overpowering classic Wayne’s puns and a graphic sexual punchline that just gets more and more fun the more you think about it: “She gives me brain, it’s skull / She drank a Wayne McFlurry. ” And “Big Boss” has one of the few tolerable Rich the Kid verses from the mixtape. Wayne shines on space production with familiar but witty punchlines. But the truth is, the bar is low. After years of health worries, label issues, and terribly gruesome raps between I am not a human being II and Free Weezy Album, it’s just nice to hear Wayne rapping properly again. It might not be a throwback, or a throwback to its glory days, or whatever hype you’ll come across, but it’s good enough that this half-silly Rich the Kid business deal isn’t a disaster. full.

Catch up with every Saturday with 10 of our top rated albums of the week. Subscribe to the 10 to Hear newsletter here.