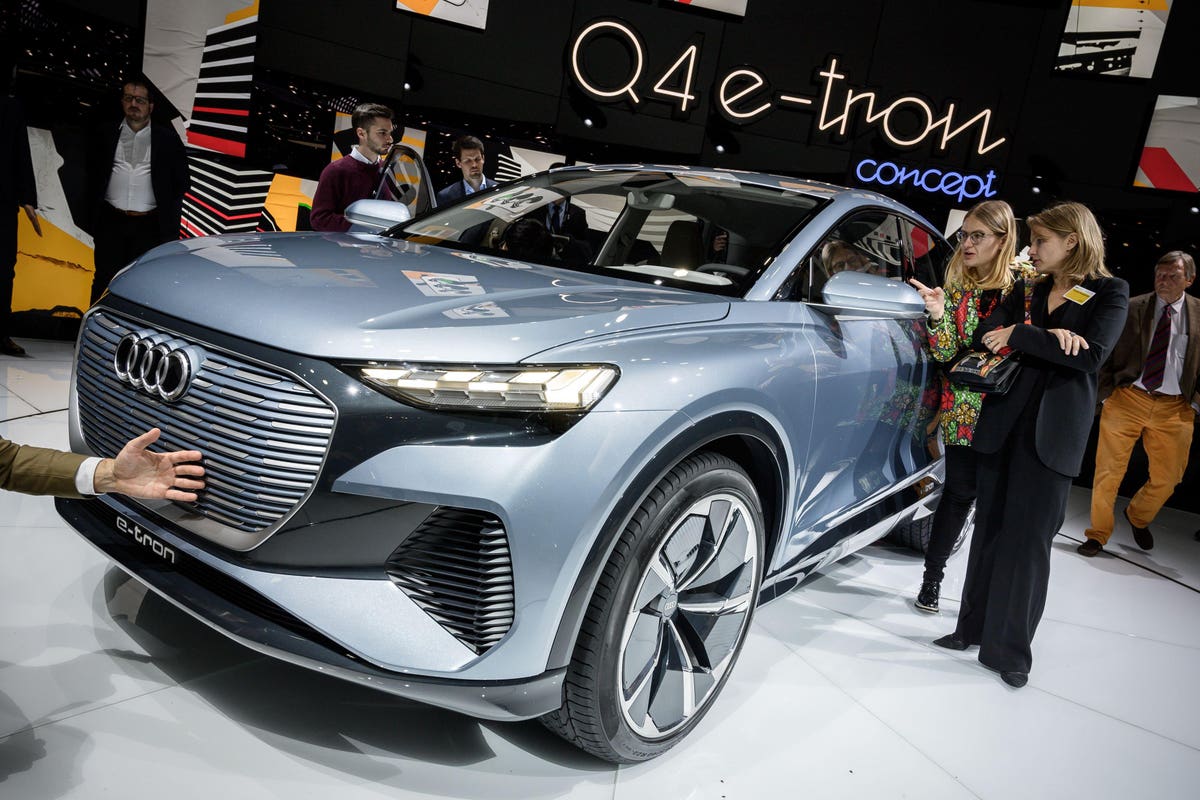 One of the advantages of having a large car company with multiple brands is that it can spend a lot of money to build a central platform and then launch a lot of different cars on that basis. New Audi Q4 e-tron shares its underlying technology with the Volkswagen ID.3 and ID.4 as good as Skoda Enyaq iV. But it’s still quite a different car, and still an Audi.

It’s still a big car. One of the advantages of most electric cars is that although they are heavy, most of the weight is under the cabin floor where the batteries are installed, so the center of gravity is low. The Q4 takes better corners than you would expect from a 2.1 ton SUV, but you should still be wary of carrying too much speed in a corner. The 50 can be very fast, but it’s more of a fast and comfortable transporter for multiple adults than an engaging experience for a single driver. That said, if you opt for the optional adjustable shocks, you can vary the ride between firm and sporty or more focused on comfort.

One of the advantages of size is the available interior space. The front is quite spacious, but the rear seats are really plush. Even among other SUVs on the same platform, the rear legroom is incredible. Two large adult passengers will be perfectly comfortable in the back. The middle seat is a lot thinner, as always, but at least benefits from the lack of a drivetrain, so there’s plenty of legroom. If you don’t have a middle passenger, you can fold down the back of this seat to create an armrest with cup holders. Another great feature for the rear passengers is the tri-zone air conditioning. Rear passengers have a center console with rear heating control with adjustable vents, and they also benefit from two USB ports and a 12V car power adapter.

However, space for rear passengers comes at the expense of rear cargo capacity. The base trunk capacity is 520 liters (18 cubic feet), which is quite generous, but the ID.4 and Enyaq iV have more – 543 and 585 liters (19 and 21 cubic feet, respectively). Those 520 liters is even more than the Ford Mustang Mach-E, but it also has a frunk, which none of the cars of the Volkswagen Group offer. The Q4 has plenty of room for four or five travel bags for four or five passengers, so it will be suitable for a family trip.

Speaking of longer journeys, range is a highlight for Volkswagen Group cars based on its MEB platform. The Audi Q4 e-tron 35 may only have 208 miles due to a smaller 52 kWh battery, making it more suitable for city driving. But the 40 and 50 have 77 kWh batteries, giving them 316 and 299 miles of range, respectively. These latter two models also support 125kW DC charging, which can recharge up to 80% in 38 minutes, making a long trip with a recharge and a break every few hours a reality.

The car I was driving was also fitted with the excellent Matrix LED lighting from the Volkswagen Group. This divides the headlights into a group of LEDs, which can be lit individually. In tandem with sensors, this can create a crossing area right where oncoming cars are detected, leaving the remaining area on the high beams. This is a very safe setup, ensuring the driver can see as much of the road as possible without blinding oncoming traffic. Unfortunately, Matrix LEDs are not available in the United States as the technology has yet to be ratified for on-road use.

Another high-tech element with the Q4, and new to Audi, is a head-up display (HUD), which projects information directly onto the windshield. Audi’s implementation is excellent, with clear indication of current speed and limit, lane departure warnings, and next-turn information when satellite navigation is following a route.

Sure, the Model Y is faster, but the WLTP range of the long range is exactly the same as the Q4 e-tron from 40 to 316 miles – and performance virtually the same as the Q4 e-tron from 50. at 300 miles versus 299 There are fewer extras to increase the price of the Model Y, but many will prefer the more conventional luxury interior of the Audi, which has a few areas that aren’t up to par (the trim in plastic on the doors) but are generally nice, especially the premium seats. Tesla has an advantage with its Supercharger network (600 stations), but the VW Group is part of the joint venture of the IONITY charging network, which now has 400 stations.

It will be a tough fight, but the Audi Q4 e-tron is a clear contender. Electric cars are still expensive, but the Q4 e-tron isn’t much more expensive than its fossil-fueled Audi counterpart, the Q5. It’s a well-made car, and if you enjoy driving an Audi SUV, there’s a good reason to switch to an electric vehicle. In Europe, you’re definitely going to weigh the list of options, to see if the Tesla Model Y makes more sense. But in the UK, the Q4 sets the new benchmark for luxury electric SUVs, until the arrival of the Model Y.

2021-09-29
Previous Post: The first reviews of “No time to die” are here
Next Post: New York’s Eleven Madison Park vegan restaurant has a secret meat room for the rich